York has been built up considerably and this area provides quick and easy access to downtown Toronto. It is a great place to call home because of its proximity to everything the city has to offer. York has easy access to the transportation systems of Toronto, making it a commuter’s paradise. You can easily make your way around the city using public transportation, or you could even cycle to and from work if you are up for the challenge. 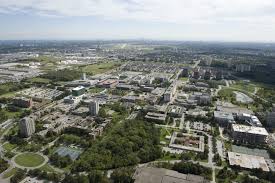 York offers plenty of recreational activities for all ages.

There is a fall/winter skate program available. Ski and snowboarding programs are available in the winter. There are also fabulous swimming programs available for all ages. An interesting program that is worth noting is the youth leadership program.

There are a number of fitness related groups and classes for everyone to enjoy. York also offers plenty of outdoor activities. From parks and trails, there is something for every outdoor enthusiast to enjoy.

Yorkdale Mall is one of the premier shopping malls in Canada. With over 250 stores including Holt Renfrew, an Apple Store, and even a Tesla Dealership, Yorkdale offers luxury at your fingertips. The 300 foot long glass atrium reaches 60 feet in the air. With so many delicious restaurants, such as the Rainforest Cafe, and a large movie theatre, one really can spend the entire day enjoying what Yorkdale has to offer. Accessible by car, bus or subway and featuring valet parking, everyone can find their way to Yorkdale. Come and see what this amazing place has to offer you.

Prior to European contact, the area of York was inhabited by the Iroquoian Seneca tribe, who had since displaced the Huron tribes that previously occupied the region. Afterwards, the Algonkian Mississaugas moved into the region, and created alliances with the former Iroquoian residents.

French and British settlers eventually moved into the area calling it home. The French established two trading posts on the Humber River, but the British arrived with an army to secure the location. From then on, the area was hugely made up of British settlers.